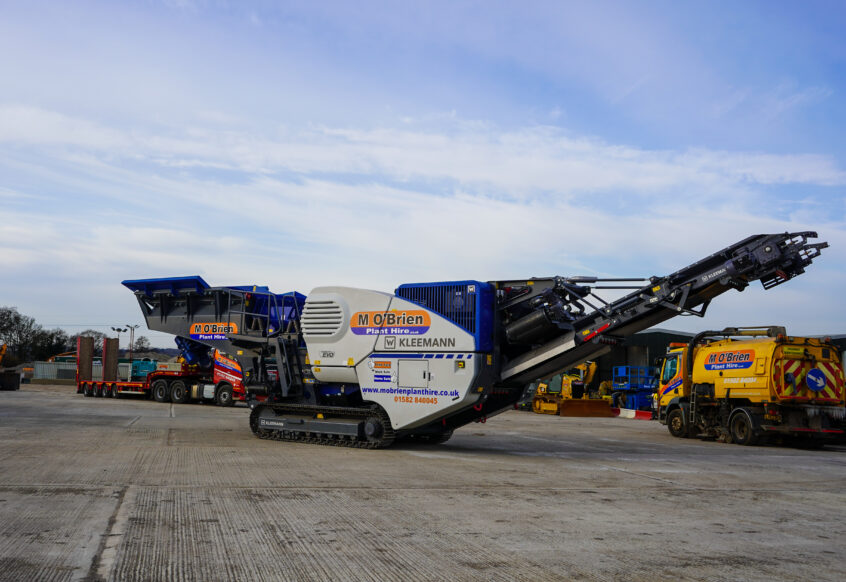 Always wanting to supply their customers with the best available equipment M O’Brien have recently taken delivery of the latest MC110Zi Evo crushers from Kleeman. The innovative diesel to direct electric drive concept offers impressive performance with the best possible fuel consumption values and played a large part in the decision for M O’Brien Plant hire during the selection process. Having tried 2 different models in the Kleeman Mobicat range, the MC110Zi Evo was chosen for its productivity and fuel economy and M O’Brien was among the first to receive the upgraded model fitted with a Tier 5 engine.

“Having conducted a trial of the MC110Z with its effective prescreen configuration, we were very impressed with the performance of the crusher, while slightly smaller than our existing options we found that there were less stoppages and more consistency of material flow on the output belt, thanks to the Kleeman continuous feed system, which monitors the crushing chamber to create the optimum feed level. What impressed us most about this machine, was its outstanding fuel economy, when you crush for a solid 10 hours and have used less than 100 litres of fuel, it really makes you sit up and pay attention.” Said Connor O’Brien, Director

“After an initial enquiry and project evaluation we carried out a demonstration of our Kleemann MC110R back in February 2020, during this demo further conversations led to a decision to demo a MC110Z (pre-screen) version of our popular jaw crusher. It was clear that we could achieve fuel savings and the high productivity required by M O’Brien. Our Area Sale manager Aidan Gillic provided on site support with our aftersales team to ensure that all the features and benefits were exploited.We knew that it would not be an easy task to convince M O’Brien to move to a new supplier and that several competitor brands were also considered.

We received an order for the first machine to be supplied with a Stage 5 emission engine in September for delivery in January 2021. This was closely followed by an order for a second machine. Both machines have now been commissioned. It has been a great experience working with the team at M O’Brien and we thank them for their trust in us at Wirtgen Ltd and the Kleemann brand.” Phil Higginson – Sales Director, Kleeman

This site uses Akismet to reduce spam. Learn how your comment data is processed.